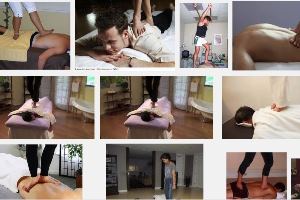 By admin_seuser May 2, 2022 Back Pain, Chiropractic Care, Uncategorized Back Pain, back pain wilmington, chiropractor

Back Pain Wilmington NC: History of Back Walking

A new and increasingly popular form of massage therapy called “Ashiatsu” is actually anything but new. This type of massage—in which the therapist manipulates the patient’s back by walking on it—has its roots in the East. Although stories of exactly where and when this form of “back walking” massage began vary, its origins can safely be traced back to ancient India, China, Japan, and other Asian countries. our back pain specialist in Wilmington NC explains more about ashiatsu.

One of the first historical citations of this practice comes from the Kerala region of India, where a practice known as Chavutti Thirumal was developed among practitioners of martial arts and classical dance. In the local language, the word “Chavutti” means foot or leg, and the word “Thirumal” means massage. Students of these martial arts and dance methods used foot massage techniques to help their bodies heal from injury and remain supple and flexible.

How has Ashiatsu evolved over time?

In the late 1990s, a form of Ashiatsu was developed by Ruthie Piper and trademarked as Ashiatsu Oriental Bar Therapy™, or AOBT. Although she was not the first practitioner of barefoot massage in the United States, Piper’s work training and certifying practitioners of the technique helped to make it more popular in this country.

The “Bar Therapy” aspect of AOBT and newer forms of Ashiatsu massage refers to the fact that the patient is positioned on a modern massage table rather than on a mat on the floor, and the Ashiatsu practitioner supports himself or herself above the patient using a set of bars installed on the ceiling. This enables practitioners not only to more easily maintain their balance, but to use the bars to control the amount of pressure being applied to patients’ back muscles.

Ashiatsu massage is considered to be less stressful for the patient’s body than many other massage techniques because pressure from the feet is spread out over a wider area than it would be if applied by the fingers, heel of the hand, or elbow. It is thus ideal for massaging large muscles such as the thigh or trapezius muscles of the back. Ashiatsu massage is certainly less stressful for the bodies of practitioners since they can use gravity to assist them in their work, rather than having to rely entirely on their own muscle power to apply directed pressure.

If you are interested in Ashiatsu massage, speak to our back pain specialist in Wilmington NC chiropractor or massage therapist. He or she will be able to answer your questions and to refer you to trained practitioners of the technique. Remember– improper use of the technique can cause injury, and it is not advisable to allow someone without the correct training to perform back walking massage.