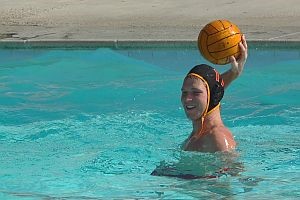 Although it may not seem like it, water polo is a very physically demanding sport. Its players are required to spend an hour and fifteen minutes in a pool, during which they cover a distance of as much as three kilometers. There is a good deal of physical contact above and below water. In addition, teammates must shoot and pass the ball without the benefit of contact with the ground to help generate force in the upper body.

The current US Men’s Water Polo team goal keeper, Merrill Moses, attributes much of the team’s success to the benefits they get from chiropractic care and their chiropractor Dr. Terry Schroeder. According to Merrill, “I can honestly say that without chiropractic, many Olympic athletes would not be able to perform to their potential. We take such a pounding on our bodies, especially in water polo, because it’s a contact sport. I like to get a chiropractic adjustment everyday just to keep my body healthy.”

Dr. Schroeder, coach of the US Olympic Water Polo team, was himself a water polo captain and helped the US win medals in the 1984, 1988 and 1992 Olympic Games. In 1998 he was inducted into the USA Water Polo Hall of Fame.

Schroeder says, “Athletes know that the difference between winning and losing can be a matter of fractions. When looking for that edge, chiropractic often makes all the difference.” Schroeder adds, “I believe that chiropractic is going to continue to be of growing importance in the Olympic world.”

Upper body injuries are common among water polo players, particularly rotator cuff injuries and other types of shoulder pain. “Every guy I think on our Olympic team was being adjusted pretty regularly,” said Schroeder. “Some of them were a little bit slower to come on board… but as they saw the other guys kind of respond and said ‘Man my shoulder feels so much better, my neck feels so much better’ – one by one they all said ‘Maybe you can help me out. Maybe I’m going to perform a little better too.’”

Schroeder is continuing in a long chiropractic tradition. His grandfather and father were both chiropractors. “I grew up seeing people arrive at my dad’s office in pain and then watching them come out with a smile,” Schroeder says. “I’ve never taken an aspirin or had a shot. I’ve always had chiropractic care as primary care, and I believe I’m in balance, that my immune system is better for it. I’m not saying there’s no place for surgery, but the body will take care of itself if you let it.”

“Chiropractic has played a huge role in keeping me healthy – I’m the only four-time Olympian in the sport of water polo in the United States.” Schroeder added, “I won two silver medals as an athlete and now I came back with a silver medal as a coach. My gold medal in my life is chiropractic.”

If you’re looking for a proven, non-invasive way for neck or back pain relief, Southeastern’s team of experienced chiropractors can help. We treat patients like you every single day. All it takes is one visit to discover for yourself the benefits of chiropractic care.

Stop living in pain; call Southeastern Healthcare today at 910-208-6720 to schedule an appointment with one of our experienced and caring Wilmington NC back pain chiropractors. We are here for you. With six locations throughout the Wilmington area, we have an office conveniently close to you.